Short comments and observations on this classic 1960’s Japanese tokusatsu, or “special effects” series. Assume some Spoilers for each episode.

Terror of the Sweet Honey

In less than a half-hour this episode tells a complete kaiju story: scientific experiments appear to create a giant monster. Human foibles and passions are revealed as the true cause of the disaster. Remorse and self-sacrifice (along with military firepower) end the menace. That the situation occurs at all is due to the zone of unbalance that modern humankind has created both in the world, and in our hearts. This is the central idea of Ultra Q as a concept. We also see why this was such an expensive TV show in its day. Not only is there a giant mole monster and consequences, but the episode also presented a catastrophic train crash, a barrage of rockets destroying a hillside, and a volcanic eruption – none of which were strictly necessary to tell the story.

In many of the episodes so far, our three continuing characters have been little more than observers to the unbalanced events going on around them. This time they are right in the middle of it – it being a classic haunted house story, one with giant spiders and a bit of Edgar Allen Poe. Once again you never know what genre Ultra Q will put us in each time. The episode also shows their typical disregard for western traditions of suspense and concealment of a menace until a climactic moment: if an Ultra Q episode is going to feature a giant spider, then they are going to show you a giant spider in the opening credits! That life-sized puppet was expensive so they are going to give it as much screen time as they can. 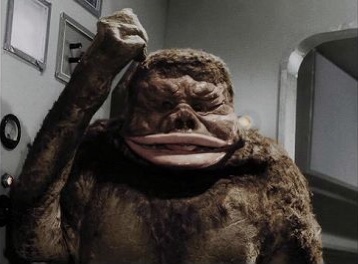 It’s just my opinion, but I think the development of a completely synthetic life form capable of accelerated growth and human level intelligence is a bigger deal than a very fast underground train. Yet in this episode the latter gets big press coverage, while the former is just casually mentioned. It’s treated a bit too casually it turns out. With a high tech transportation system and elaborate miniatures that exist mostly to explode spectacularly, much of this episode felt like the British puppet show Thunderbirds — which was very popular in Japan. We also get two boys in a trench coat pretending to be a adult, so this episode has a lot going on, to say the least. The featured monster here is said to be modeled on a popular Japanese comedian of the day. Maybe that is a clue that could explain the cryptic lasts words as the monster flies into space: “I am seagull!” It could be as if this had been an American show, and the monster had white hair, an arrow through its head, played a banjo and said “I’m a wild and crazy guy!” Or it could be an Anton Chekhov reference.

Note: Since writing this I’ve learned the “Seagull” line is a reference to the words of Cosmonaut Valentina Tereshkova, the first woman in space.

From the comedy of last episode, we quickly jump back to a dangerous monster story tinged with personal lost and grief. I wonder sometimes about the clarity of the English translation of Ultra Q. This episode gets kind of fuzzy in its timeline, with events sometimes seeming to have occurred recently and sometimes years ago. Our three heroes are again directly involved in the action, with poor Ippei-kun getting badly injured, and thus establishing a personal connection between the characters and the plight of hospitals dealing with patients who can’t be evacuated away from monster danger. Balloonga is itself an interesting monster, since it is not malevolent or intentionally destructive. Its energy absorbing metabolism is its natural biology, just one that is incompatible with our civilization.