Adam Strange is one of the characters I associate with my earliest days of reading comics. He is a sci-fi action hero, created in 1954, in the tradition of Buck Rogers, Flash Gordon, John Carter, etc. The (mostly) ordinary human thrown into a science fiction setting and rising to the call of heroism. Adam Strange stories had the gimmick that each one opened with Strange rushing to some remote or dangerous location in order to be in the right place to encounter the “Zeta-beam” that would transport him across space to the planet Rann where love and adventure waited. Over the years there have been many attempts to update or modernize the character, often turning this light sci-fi adventure into something grim, gritty, and dystopian.

Young Justice is more restrained in their adaption of the character. We’ve known since the first episode and its mention of “Zeta-Tubes” that Strange would likely show up at some point. Here he is an engineer who invented the teleportation technology and his jaunts to Rann, while still originally an accident, are not so limited. In the comics, the people of Rann were humanoids exactly identical to Caucasian Europeans, as were so many space aliens of the era. Here, while still pretty human, they have at least different skin tone and pointy ears. Strange is no hero yet, though this episode points him down that path, and provides him with his signature jetpack and raygun.

Strange is accompanying a squad of the Team to Rann in order to investigate the theft of Zeta-technology by the aliens who have infiltrated Earth. On the mission are Superboy, Miss Martian, and Beast Boy – who provides us with our second helping of deep comic book lore in this episode.

Back in Season One’s “Image” we met the actor turned conservationist Marie Logan – whom Megan molded herself on when she needed a human identity. Marie has a young son, Garfield. When Gar is injured and needs emergency medical care, he receives a blood transfusion from Megan, since as a shapeshifter she can change her blood into the necessary type. It all goes well, and that’s the last we see of the Logans in Season One. 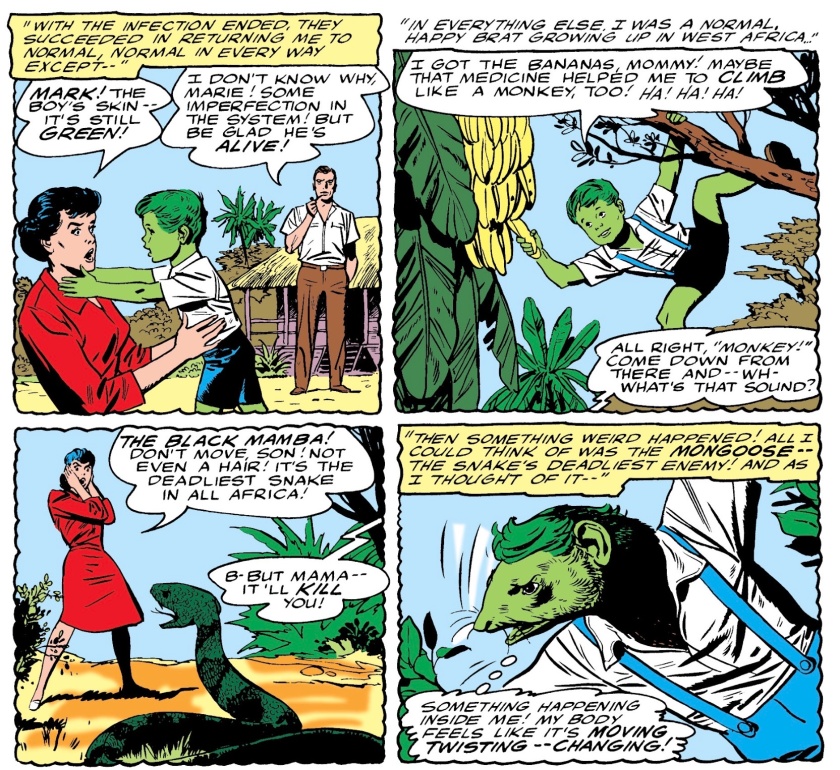 Anyone familiar with Teen Titans would know what would result from this. Now Gar himself is green-skinned and can change into any animal – and refers to Megan as “Sis.” That a transfusion of Martian blood gave him his powers is a smart and logical update to his origins, where before he just received a vaguely explained experimental treatment: all that was needed in a simpler era of comics. None of these details are actually covered yet in the show, but it’s not hard to connect the dots. You have two green-skinned shape changing superheroes, in makes sense to find a way to connect them. There’s one additional glimpse into Gar’s life: it seems his mother was murdered by Queen Bee in revenge for the events in Season One. Megan appears to be looking after him now and we don’t yet know if, as in comics, Gar was at one point adopted by Rita Farr and Steve Dayton (Elasti-Girl and Mento from Doom Patrol).

As much fun as these journeys into comic lore are, the biggest character moment of the episode is the glimpse into why Megan and Conner broke up. Throughout their mission, Miss Martian is efficient and taciturn. She’s not playing “Hello, Megan” any more. She and Superboy work together professionally, but coldly (though Gar seems determined to have them recall past good times). In a quiet moment with Alanna, their guide on Rann, Conner reveals some of what’s happened between him and Megan. It was his decision to break things off. “She left me no choice,” he says, but no more.

We see more though. Once the Krolotean operation on Rann is uncovered, Miss Martian forcibly mind scans one of the aliens, leaving him a drooling husk, his mind crushed. This is more merciless that we have ever seen her before. It contrasts with Alanna, who makes an effort to save the life of a Krolotean, even as he was trying to kill her. At some point over the past five years Megan seems to have made the call to cross a line. In Season One it was Superboy who insisted that she not force herself on other being’s minds. Having been created to be a mind-controlled slave himself, he knows what it is like. Whatever happened to change Megan, Conner seems unable to forgive her decision.

Miss Martian did get the information she was looking for, ominously proclaiming “I know what happened on Rimbor.” Rimbor was the planet the mind-controlled Justice Leaguers went to during their missing hours. It is also another part of the cosmic scale DC Universe, being the home planet of Ultra Boy, a character from the Legion of Superheroes, another sci-fi superhero stable of DC, though one set a 1000 years in the future. Young Justice is tying together a lot worlds and comic book history into the one storyline.